Waiting For a Forever Family 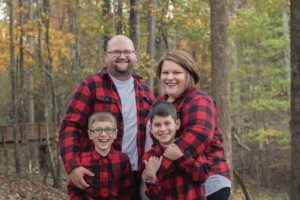 Before we said, “I do”, my husband and I sat down and had a really serious conversation about foster care. We both knew going into our marriage that God had placed foster care on our hearts long before we ever met. A little over a year into our marriage, we were both working multiple jobs trying to make ends meet and we were barely seeing each other in the process. We wanted to become parents so badly. I had a dream that one day I would be lying in bed and a little boy would wake me up and say, “Mama”. We were struggling with infertility and caught in a cycle of just going through the motions. Then, God spoke to Ben.

On September 16, 2016 God sent us from our one-bedroom apartment in Michigan to South Carolina with no jobs, no place to live, and very little in our bank account. After moving all of our possessions into a storage unit on Wade Hampton Blvd. in Greenville, we stopped for lunch at Wendy’s and saw the Miracle Hill Boys’ Shelter sign. The Holy Spirit tugged on our hearts to apply, not knowing what would come of it. A month later on October 16, we were moving into our first home together on campus of the Miracle Hill Children’s Home. We had been hired on as full time cottage parents. God had blessed us more than we could have imagined. We were obedient and God gave us way more than we could ever repay him for. We were working with foster children helping them through some tough hurdles and loving them in the process.

I Felt So Alone

In early 2017, I was diagnosed with polycystic ovary syndrome. I struggled with seeing my value as a mother and as a woman. I remember just crying. I remember thinking back to that dream of a little boy coming up to me and calling me “Mama” and wondering if it was God or me.  In church service I saw all of the ladies walking around holding their babies while worshiping and feeling so alone.

Family members and friends asked me, ‘When are you guys going to have a baby?’ or ‘Have you guys thought about growing your family?’ As if Ben and I didn’t already make a family. Yes, I thought about growing my family. I thought about it every day. Once people found out that I was a house parent working with foster children, I would be greeted with comments like, ‘Don’t you want to start your own family first?’ and the one that still rings in my ears, “Yea but, you’re not an actual mom.’

I knew that my family and friends meant well, but it didn’t make it hurt less. The doctors don’t know if I will ever bear children. That’s just a reality that I am slowing coming to terms with. I used to always say that I never desired to be pregnant. I just wanted to be a mama.

In the fall of 2017, two boys in the cottage, Cameron and Bryce, asked us to be their forever family. God had placed them on our hearts, but we were shocked he placed us on theirs. They had been in care of the South Carolina Department of Social Services (DSS) for some time, and we were told that the boys would be legally free (able to adopt) sometime very soon. In the meantime, we were prepared to foster them.

We had so many people telling us that it was close to impossible for us to be able to foster them. We knew that God would not put it on both of our hearts for no reason, so we pressed on anyway. We went to Lowe’s and got some items for the house, got fingerprinted, background checked, all of the things required. We were getting things in order. Call after call came in asking us for more information. We were told to continue getting things accomplished, but everyone was still unaware if we would be able to foster because of our unique situation. 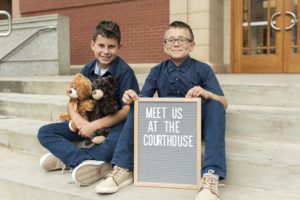 We prayed and prayed. We finally got the call. Our home study had been approved and we received our foster license. Everything had worked out so that we could foster. We were so excited. On May 4, 2018, Cameron and Bryce were placed with us. We were told by DSS that it wouldn’t be very long until they would be able to get adopted. We were so excited. Weeks turned into months and months turned into over a year. We were told that they might be able to be adopted before school started back again. School started, and the next promise was possibly Christmas. Christmas came, and then we were told they could possibly get adopted before the first part of the year. More months went by, and it was the end of school. School ended and they were able to get adopted on July 23, 2019!

God Works in the Waiting

There were times that we faced challenges and many obstacles in our way. We were fortunate to have some people on our side who would help us any way they could answering any questions we had or just hear us vent. More than anything though, we had to be patient and understanding. When people hear our story, most become frustrated with the system for taking so long. Trust me, we have shared those frustrations at points. However, looking at it now, that year and some months gave our sons time to heal. Time to grow. Gave us a stronger bond. As exciting as it is for us to gain members of our family, we will never forget that our sons had to lose family in order for this to happen.

Sure, the foster/adoption process can be long. Sure, at times we wanted to pull out our hair but, we feel like that process is also a refining process. The long process brings out emotions and feelings inside of you that maybe you didn’t realize or think about. It weeds out the people who are possibly not ready to be foster/adoptive parents. It helps you examine your heart and helps you find your true motives.

You Don’t Have to Be Special 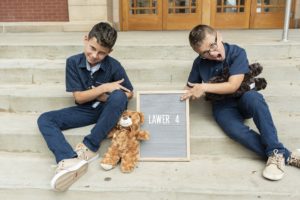 We hear a lot that we are special for working with foster kids and adopting our boys. We hate it when people say that. We could not disagree more. Nothing about us is special. Sure, not everyone is called to foster or adopt. Not everyone is called to be a police officer or a nurse either. However, there are ways that we, as citizens can still help. There are ways that you can help your local foster community.

We don’t know what we would have done without the support of our family and friends. There are so many ways you can help. Serve. Love. Share. Every child deserves a good life.

Months after Cameron and Bryce were placed with us, Bryce woke up in the middle of the night scared from a bad dream. He snuck into my room,tapped me on the shoulder and woke me up saying, ‘Mama’.

Last fiscal year, nearly 80% of the children discharged from Miracle Hill Foster Care were successfully discharged from state custody. A majority of them went back to their family or friends of their family, and some were adopted. If you’d like to learn more about fostering or how you can support a foster family, connect with Miracle Hill Foster Care.