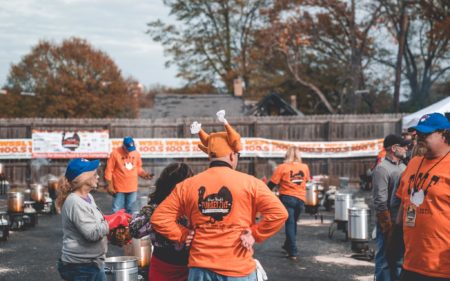 677 turkeys. 60 fryers. 250 volunteers. One dream—feeding all the children, women and men in care at Miracle Hill Ministries for Thanksgiving plus additional families in need throughout the community.  The WSSL 100 Great Possible Turkey Fry on November 21, 2017 was epic in every way. 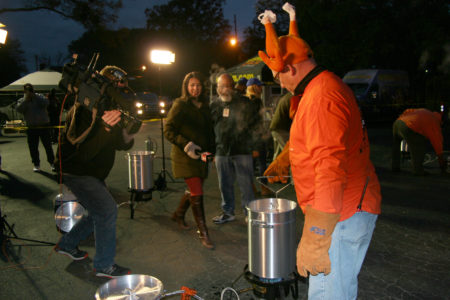 Reporters, Miracle Hill staff and volunteers watch as the first turkey is lowered into hot oil.

The first volunteers and staff stood in the dark, cold parking lot of the Spartanburg Rescue Mission before 5 a.m. to meet  reporters from area television and radio stations. Countless hours had been spent in the weeks leading up to the event gathering the turkeys, vegetables, and volunteers. Students from Virginia College and the Swofford Career Center culinary program stood ready with knives drawn to carve the turkeys, peel the mountains of potatoes, and chop the never-ending stream of onions, celery, and sweet potatoes. Men and women from Duke Energy, Frontier Label, Safelite, and LSC Communications carted food from one station to the next, carved turkeys to cool, and carried out directions by the kitchen staff. More volunteers from all walks of life took time off from work to come and support Miracle Hill. 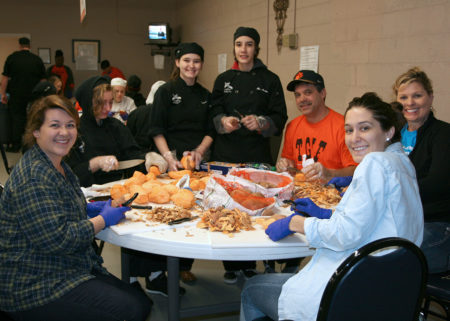 Swofford culinary students and other volunteers prep veggies for side dishes.

By 6 a.m., the filling of the fryers began. By 7 a.m., the first of the turkeys were lowered into the hot oil by Scott, Chris, and Rusty, the “Fry guys”. As they have done for each of the last 11 years, they took care of the centerpiece of the meal. Scott Lane says this is his Thanksgiving. Continuing the work of his mother, Sally Lane, and Beth Bradley and Bill Ellis of the WSSL 100 Ellis and Bradley show, he has seen the Turkey Fry grow from eight volunteers cooking under the great tree in the front yard of the Spartanburg Rescue Mission to the crowd of volunteers plus Miracle Hill staff today. Everyone involved considers it a day to give back to the community, to serve those who are less fortunate.

Many of the volunteers come back to man their stations year after year. Bo McDonald of your marketing.co said, “Our team has come the last four years. It is one of our favorite things to do.” Aalliyah Floyd, a Swofford Career Center culinary student, said she had come as part of her classwork but would return. She spent the morning peeling potatoes and more potatoes to be served on someone else’s Thanksgiving table. 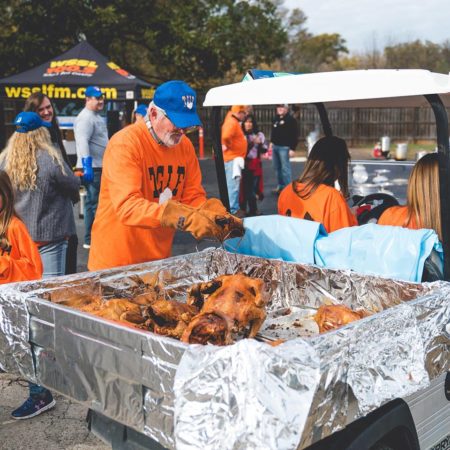 Volunteers drive a golf cart to transport fried turkeys to the cooling station.

The overcast sky did not dampen anybody’s spirits. A golf cart whizzed by filled with golden turkeys. Parked cars were a hike away from the action, but that didn’t stop folks from coming to help. Vegetables steamed in the kitchen and cooled in the dining room. From the smiles and cheery voices, it would be easy to mistake the crowd for a party instead of an army of helpers. As the afternoon light waned, the gleam of brightened faces continued as the food prep wound down and the cleanup began.

The Thanksgiving meal would indeed be bountiful. Rumbling stomachs would be satisfied. Aching hearts would be filled with tangible proof of the love of God and His children. Jesus would be glorified. All in all, it was a great day’s work. The fried and smoked turkeys were transported to Miracle Hill’s nine shelters as well as given to foster families and First Baptist Spartanburg to distribute for the Feed the Community program .  All in all, more than 5000 people experienced a Thanksgiving feast prepared with love.