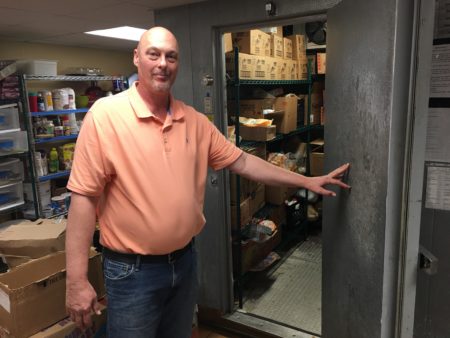 Russell Weaver serves as Kitchen Manager and Resident Support at the Overcomers Center.

As I entered the lobby of Miracle Hill Overcomers Center recently, I was greeted by four men, one of whom towered head and shoulders above the rest.  That tall, unassuming man is Russell Weaver, currently employed at the Overcomers Center as part-time residential support and kitchen manager.  He was hired in December 2017, but his journey at Miracle Hill began in November 2016 when he entered the men’s addiction recovery program.

When Russell entered the Overcomers community, he feared Christianity for two reasons.  First, he was raised as a Jehovah’s Witness, and second, he has a shy personality despite the natural attention he draws because of his size.  Russell was always big for his age, so he was easily recognized in a crowd, but another distinction was his spiritual upbringing which resulted in lack of participation in things normal to most children like birthday celebrations, holidays, sports activities, and college.  Russell always ‘felt good’ at observing the rules of his church, with strict reinforcement at home; however, beneath that facade were a heart and mind fertile for progressive rebellion.  Seeds of addiction were sown early.  When Russell was 10, he sniffed airplane glue with a neighbor for a fun buzz.  At 13, Russell began to drink alcohol and smoke cigarettes which later transitioned to marijuana, then escalated to cocaine and eventually methamphetamine.

Russell graduated from high school in 1985, but he left home that summer to go his own way.  Since drug use began at a young age, Russell struggled with  academics, in relationships, in solving problems — the realities of life.  He readily admits he never was a functional addict.  He was able to perform well at work because he was taught a strong work ethic from his father, plus he excelled in customer service. But the pull of alcohol and drugs was an ever-present force.  Every drink and every hit led to increasing irresponsibility and recklessness, so it became harder and harder for him to stay in one work place for long.  Over time, he excelled at being down in life’s gutter until it became his place of comfort.  As he fell deeper and deeper, failure produced increasing levels of guilt, shame, and pain.  He was trapped.

In the throes of addiction, Russell felt like he was going to die at an old age, still using drugs, miserable, and just existing.  He sought help from men affiliated with his church, but none was offered.  Broke, busted, and disgusted, Russell got down on his knees in an empty room and cried out to Jehovah for help.  God met Russell there that day and made a way for him to safely make it to the Overcomers community in November 2016. 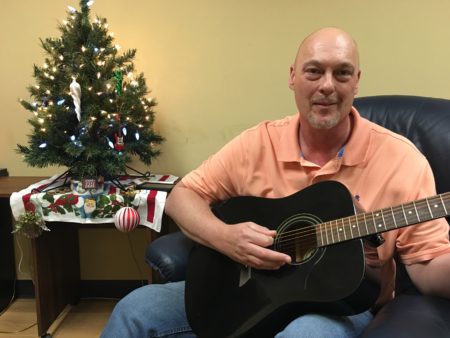 He was welcomed  ‘as is’  even with his many suspicions of Christianity.  Russell brought his New World Translation Bible with him so at least he had something religious to carry inside.  Everything else was new, challenging, scary, and exciting.  He was unfamiliar with Christian music and hymns, and he was uncomfortable with the celebration of Christian holidays.Thanksgiving was the first one he encountered.  Bible doctrine was mind-blowing, and he never met people who knew and loved Jesus like the people at Miracle Hill did.  It only took a few days, but Russell did settle down at the Overcomers Center–not just because of its structured program or theology, but mostly because of the people.  Russell felt accepted, safe, and genuinely cared for, at age 50!  Isolation was discouraged and engaging in community was encouraged.  Real hope was introduced to Russell through this ministry.

Of all the Bible doctrines, the teachings about the Holy Spirit intrigued him the most.  He had been taught that God’s Spirit was merely a force on earth, but Russell began to observe the Holy Spirit working through the Word of God and in peoples’ lives.  As a result, Russell’s heart began to soften.  His first Bible study was in the book of James where he learned that he could not blame the devil for everything.  (James 1:13-16)  He also learned that each individual had to accept personal responsibility for the choices he made, though the evil influence that the devil has on humanity can never be forgotten.  Russell then studied the gospels and began asking questions.  The Holy Spirit was now working in him.  Russell developed a spiritual appetite and began to learn something from every Bible lesson and sermon he listened to.  One chapel was special, though.  Pastor Paul Fleming spoke, and at the conclusion of his message, he simply invited anyone in that room who wished to pray “the sinner’s prayer” to do so.  Russell sat in his chair and remembers audibly repeating the words of the preacher. Russell accepted Jesus Christ as his Savior that day.  He thought he came to Miracle Hill to get clean of drugs, but what he really got was the Savior of every slave to sin and the Lover of every soul. 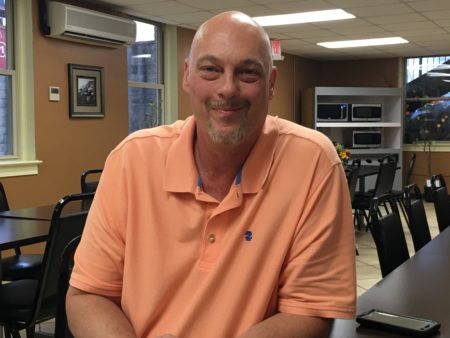 Russell completed the Overcomers program on June 2, 2017.  He then became an intern in the transitional housing program for six months.  In December 2017, a part-time position opened up at the center; Russell was offered the job and he gladly accepted. As a staff member, Russell was treated with Christian grace.  Even at the age of 52, Russell was as green as green can get, but he was allowed to make mistakes, learn and grow from them, and take steps to grow in other areas.  Russell loves to learn, and his position allows many opportunities for that.  In less than a year, he acquired skills used in management, and he recently earned the ServSafe kitchen manager’s certificate.  On the job, Russell has made many improvements in the kitchen and dining room and with etiquette.  He loves working with the men in the program and strives to encourage every one of them.  He has done remarkable things with organization, and ‘his’ kitchen recently received a perfect inspection rating.  Russell tackles problems with much prayer, lots of godly advice, compassion, and practical observation and correction.  He is becoming a super multi-tasker and often deals with situations on the run.  His potential is amazing.

But what matters most to Russell now is Jesus.  Beyond salvation, Russell finds hope and comfort in God’s fulfillment of Revelation 21:1-4, especially:  “Now the dwelling of God is with men, and He will live with them.  They will be His people, and God Himself will be with them and be their God.”  Real life began for Russell at age 50, but he continues to experience new life in Christ every day.