God Saved Me From Myself 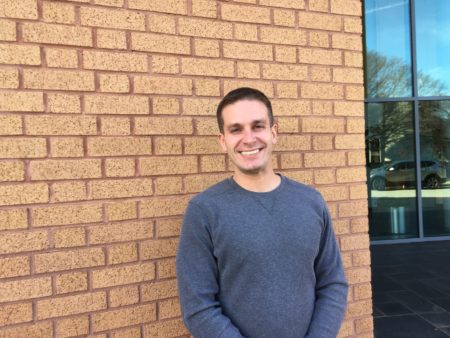 John Norwood’s hope and self-esteem had hit rock bottom.  He was a homeless drug addict who was in and out of jail and divorced after only five months of marriage. Just as he was becoming content with the idea of throwing his life away, he said it was divine intervention that saved him from himself.

One night while walking through a grocery store parking lot, John declared to himself, “Well I guess I’m okay with being a worthless addict for the rest of my life.  Now, I just have to figure out how to pay for my drugs all the time.” He said God must have heard him. The next day he was arrested for shoplifting and thrown in jail.  It was a defining moment in John’s life.

This time while in jail, he started reading the Bible and found Jesus.  “I know that sounds cliché.  But I had more peace than I had ever had in my life.  I was ready to face the consequences of my actions.” He was facing 31 years for multiple charges.While serving time, he found out about Miracle Hill’s Overcomers Center and sought assistance to have the program suggested as part of his sentence.

Instead of serving three decades or more, he received two years of rehabilitation via the program, along with probation for five years. John was grateful.  Still, the transition from jail to Miracle Hill wasn’t easy.  He wasn’t used to the structure and level of discipline that the Overcomers program required of its participants.  “It was rough at first,” he said, adding it was well worth it in the end.

From attending chapel twice a day to doing chores to working in thrift stores, John said he developed a stronger work ethic and better sense of accountability.“It was a good healthy experience. The staff is amazing,” he said. “They are highly encouraging and they want you to succeed.”

John said he found the Bible Study classes particularly enlightening.   “I was raised in a pretty good home,  but I didn’t grow up in church.  So this was the first time I was surrounded by believers.”

It’s been nearly four years since he graduated from the program. That experience became a stepping stone to even better things to come.  “Once I started to put my faith in God, everything started to fall into place.” Through Miracle Hill, he was connected to staff at Homes of Hope where he took classes and received on the job training for electrical work.  John now operates his own business. He keeps in touch with staff at Miracle Hill and was invited to speak at a reunion for program graduates.  He said sharing his testimony of how God saved him from himself has been one of the greatest privileges, whether he’s speaking at a local event or conversing with clients.

“I’m kind of an open book.  God probably gave me my business also as a ministry.  I’ve prayed for people and I wind up getting to share my story, and they want to hear more about Miracle Hill.”