A Tattoo in God’s Collection of Transformed Lives 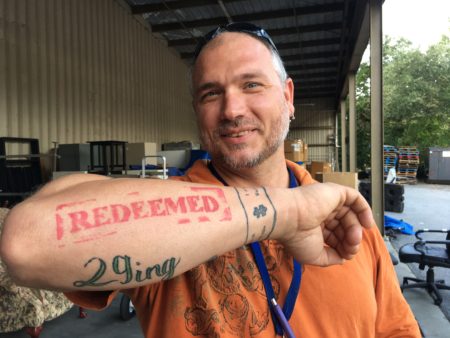 Bradley Nivens showing one of his 47 tattoos

In the Sermon on the Mount, Jesus spoke these words:  “Judge not, that you not be judged.” But as humans, we often make snap judgments based on first impressions. Be honest.  What are your first thoughts about tattoos?  Signs of rebellion? Poor life choices? A personal or fashion statement? An evangelistic tool?  For Bradley Nivens, his 47 tattoos represent many of these things, a story board that today gives him an opportunity to share his faith journey and his passion for autism awareness.

Brad was born and raised in an Assembly of God home and church. He was even named after a pastor at that time.  He was a PK, an associate pastor’s kid, an Army kid, and a police officer’s kid. Life as a PK was great until peer pressure hit Brad in his mid teens.  Brad slowly left his church — day by day, step by step, and decision by decision — to make new friends with people he thought were true friends.  However, these ‘friends’ introduced him to the ways of the world which eventually led to alcohol and drugs.  In addition to the ill-effects of substance abuse, Bradley had a bad temper.  He was mad at anyone and everyone who set him off; his fuse was short, so it didn’t take much to see or hear his fury in action.

The principle of sowing and reaping is fairly predictable for those using illicit drugs and abusing alcohol.  For Brad, the consequences included an early marriage that ended in divorce and two babies.  Bradley was jailed for a time, then placed on probation.  None of these deterred his ‘using,’ but Bradley got a little smarter and attempted to hide his addictions.  It takes a lot of effort to keep lies and secrecy ongoing; adding an explosive temper to that mix puts relationships in harm’s way. Brad’s second marriage failed, and with that came severe depression.

In despair, Bradley decided it was time to end it all, so in February 2012, he took 37 anti-depressants and vodka and expected to die.  However, God had other plans.  Brad’s second ex-wife intervened and called the police. Bradley was given an ultimatum:  Go to the ER or go to jail with a side trip to the ER.  Brad voluntarily chose the ER, but the medical doctors could not fix Bradley’s real problem–a life full of sin and separation from God.  Even after all this, Brad returned to whatever substance he could get his hands on to numb the pain he felt.  God in His mercy knew Brad’s breaking point–the loss of his two sons.  On July 12, 2012, Brad’s world came crashing down, and he lost everything–his mind, his boys, his house, and his car.

One of Brad’s pastors said, “Sometimes God lets you hit rock bottom just to show you He is the Rock at the bottom.”  On July 12, 2012, Bradley Nivens lost everything he valued, but on July 14, 2012 he found God, the true source of every valuable thing!  When Brad turned to God, he gave Him all he had and began to trust Him with reckless abandon.  Since then, Brad’s life has never been the same.  God gave him peace and a clear mind on July 14.  Two days later, Brad’s boys, who both have autism, were returned to him. By early August, Brad got a new place, and he acquired a car in early September.  Brad was baptized on February 17, 2013, exactly one year after his attempted suicide.  He has been clean of drugs for six years and free of anti-depressants for five, which he had taken for two decades. Praise God for such deliverance! 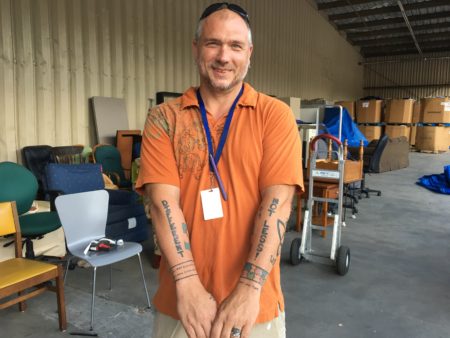 While addicted to alcohol and drugs, Brad pierced, cut, branded, and tattooed himself to numb the pain. Even though Brad turned to Christ, addictive urges and ideas continued.  Many addicts walk to the beat of a different drum, and relapse is common.  But God gifted Bradley with an artist’s mind, so Brad used that gift and turned it into prayers, then drawings, and eventually tattoos to overcome the deviant desires he often experienced.  Each tattoo has special meaning.  Some of his works are large and in charge; others are mini spectacles with hidden meanings. At first, these works of art gave him an outlet to escape alcohol and drugs.  Now they are opportunities for Brad to glorify God and constantly remind him of God’s operative truth and grace … and where he could be without Him.

Rather than using evangelistic tracts, Brad uses his tattoos to tell stories of his faith and of autism.  Brad loves to explain the symbolism and stories behind each design as well as share his plans for future additions.  His tattooing often opens doors that would be hard for the average Christian to touch.  Although he is not a public speaker, he is a passionate one-on-one storyteller and truly doesn’t know a stranger.

Today Brad serves at Miracle Hill’s thrift store on Wade Hampton Blvd. as a recently-promoted processing manager.  His current promotion came as a result of hard work, patience, and God’s timing.  Initially, Miracle Hill took a risk in hiring Brad due to his past, but it was definitely a risk that has reaped positive results.  Brad currently owns his home, is married to Krystal, a true ‘jewel,’ is father to CJ and Evan, and is stepdad to Kaleb, Jazmin, and Rosie.

God’s first impression of sinners was pity and mercy, but He didn’t stop there.  He devised His plan of salvation and sanctification by sending His Son to intervene for each and every sinner on Earth.  All who would trust Christ are redeemed from deep, miry pits and then become vessels in the Heavenly Master’s hands. I like to think of Brad Nivens as a unique ‘tattoo’ in God’s collection of transformed lives.