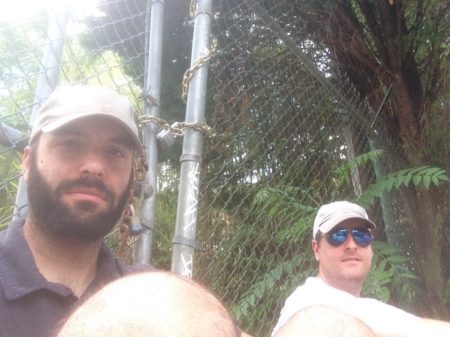 There is a lot of waiting when you are homeless. Lots of down time. This is a part we never got used to and was one of the hardest things to deal with. I didn’t think to bring a book with me. I thought that if I were ever homeless for real I would get a LOT of reading done. But there may be something that happens to the psyche that adapts to the waiting, not unlike someone doing time in prison. The body and brain adapt in order to survive.

My life and the lives of many Americans move at a pretty fast speed; here things slow down, and I can imagine that once things slow down it can be difficult to get that pace moving again. I’ve noticed at Greenville Rescue Mission that it’s hard to get guys moving sometimes; a single appointment or task seems to take up the entire day. This could be how the brain has adapted over time, which presents a difficulty once they try to speed things up again, not unlike someone whose muscles have atrophied over time due to lack of use.

As we waited for dinner, I listened as a few guys had a theological discussion on the other side of the room. The thrust of the argument was that in Job, when God was there, Satan was right there too…therefore wherever God goes, Satan is close at hand. I declined to join the discussion. A big part of why I did this was to sit back and observe the homeless culture as fellow homeless men, rather than as counselors, and to see how they would talk to me as “one of them” rather than as a counselor or staff member.

Next was dinner. We followed the crowd to another building and got in line, which went all the way around the room. As we waited, I chatted things up with a few other guys in line behind me, asking what they were doing here, what their plans were (this was a line of questioning I soon found is something homeless people don’t normally ask each other, and it made a couple of guys suspicious of me later). Dinner was a good, balanced meal, which I was grateful for. Jason and I had eaten a big lunch at Subway on the way in just in case the food was not up to par. Jason and I did not sit together- we didn’t want to appear to be together too much, knowing that this could arouse suspicion as well. Many homeless people are loners; this is a part of their problem. They can tend to isolate and burn bridges relationally which causes them to be without the help of friends and family when they need it. So Jason and I ate at different tables. I met a couple of guys at my table and asked them basically how to be homeless in Atlanta. They eagerly filled me in on the transit system, free places to each lunch, and things to do during the day. One gave me an empty bus card which I could load up later. Nice guys. We found most of the homeless men we met to be mostly willing and eager to help out, even to go out of their way.

After dinner, more waiting. After a couple of hours we heard there was chapel. Apparently it had already started. We had never heard an announcement. There were about five guys in there, and about 15 more trickled in throughout the hour. A guy was giving a sermon, which was decent. He handed out small Snickers bars to everyone who came in. Nice. After he was finished, another group came in for what turned out to be a second chapel. They were from a church and seemed to be well known to the men there. They played recordings of some worship songs, and then a young college student gave a sermon he had prepared. A number of the illustrations were of the young, middle-class privileged variety, but overall was not a bad sermon. In fact, I remember his main point: There are no perfect people, only forgiven people. Or something like that.

After chapel, you guessed it, more waiting. Eventually we went back to the dorm room and got ready for bed. I brushed my teeth. Jason bravely used the facilities. It took me awhile to get to sleep, and I woke up fairly regularly, but I got a better night’s sleep than I thought I would. The night before we left I could feel a cold coming on; my throat was getting increasingly sore, and I was starting to feel it. This made me wonder what I would do if I were genuinely homeless and had a health issue, which is the case for many. Over time it would be very uncomfortable, and eventually I might go looking for some way to self-medicate the pain and discomfort, physically and emotionally.

At 5:15 a.m. a staff member came in, clicked on the light, and announced that anyone who was still in that building after 6 a.m. would be asked to leave with no breakfast. We were also to strip our beds and put the linens in the hallway. So we got up, went outside, and sat on a curb. (The facility had a dorm building and a second building which had the cafeteria, admin offices, and the chapel). I had struck up a longer conversation the night before with a younger man, and he found me and we talked about what he had planned that day. He had mentioned finding some day labor before, and now he was going to some kind of appointment somewhere. Eventually we were led to the cafeteria building where I expected to have breakfast, but everyone was walking in the chapel room.  Apparently there was morning chapel (also optional) before breakfast. This time the room was full. Again, a decent message, this time from a staff member who had himself been homeless, had been at the mission, and had been through years of life change and recovery to get where he was. I appreciated it. No Snickers bars this time…

We went outside and waited, again. Finally breakfast. I got in line. Jason was two or three people back in line. Between us was a man with obvious mental health issues who was talking with himself. He made a number of references to the ice age and the type of freezer used, Star Trek, and the holodeck. I grew up on Star Trek, so I was tempted to engage him on those issues but decided against it. Breakfast consisted of oatmeal, a hard boiled egg, and a bagel, slightly stale. This is pretty close to what I eat at home, so I ate up. After that we got our bags out of the lockers and headed out to the streets.

Post submitted by Jeremy Huff.  Jeremy, along with Jason Cochran (both Greenville Rescue Mission counselors), posed as homeless men in Atlanta to learn how the homeless are treated on and off the streets. Jeremy can be reached at jhuff@miraclehill.org or 864.631.0165.